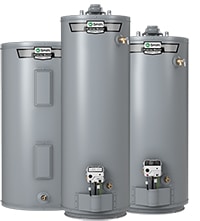 A.O. Smith is an S&P 500 company whose history is deeply intertwined with the history of the United States. Its humble began in 1874, when Charles Jeremiah Smith opened a shop manufacturing parts for baby carriages.  Since then A.O. Smith has grown into a major corporation with facilities located all over the globe.
The company was incorporated as A.O. Smith in 1904, when C.J.’s son Arthur began manufacturing automobile frames. By 1906, Henry Ford had contracted with A.O. Smith to begin mass producing the frames needed for his Ford Model N automobiles.
A.O. Smith’s engineers developed the assembly line process necessary to produce frames ten times faster than the previous rate. Thanks to this development, the automobiles were able to be produced faster and less expensively.  This helped to popularize this new mode of transportation.
In 1939, A.O. Smith produced their first residential water heater, setting them on the path to become North America’s largest manufacturer of water heaters today. Again, A.O. Smith made history by developing the process of fusing glass to the inside of steel water heaters.
Before this innovation, homeowners had to replace water heaters frequently due to corrosion. Smith’s glass-lined tank became the industry-standard. The first glass-lined commercial water heater becoming available after the war, in 1953.
During World War II, A.O. Smith put its engineering and manufacturing expertise to work for the U.S. military. Among other things, they built five million bombs, landing gear for bombers, and over 46,000 propeller blades.
After the war, A.O. Smith continued innovating and manufacturing. In 1972, they began producing water heaters in Europe, at a facility in the Netherlands. Today, A.O. Smith has five water heater manufacturing facilities in North America, plus factories in the Netherlands and China.
But although they’re a global company, A.O. Smith’s water heater division is headquartered close to home, in Ashland City, Tennessee. In fact, this residential manufacturing location boasts the title of the world’s largest water heating factory.