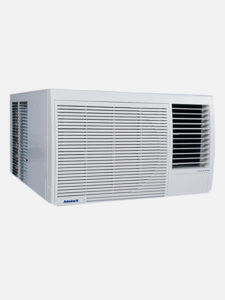 Admiral is an American appliance company with a long history. However, over the past few decades, the company was broken up, sold off, and absorbed by other companies. Today, you may still find some Admiral appliances in operation, but Admiral air conditioners are no longer being sold.
The Admiral brand began in the 1930s as a company that produced radios and phonographs. With the development of television, Admiral got into that business, producing several different models of televisions in the 1950s.
From World War II onward, Admiral was also designing and manufacturing electronic equipment for the US military. For instance, a 1957 advertisement in Aviation Week magazine touts Admiral’s development of a television camera for military use. Not only can this camera provide a clear picture in low-light conditions, it can even be used underwater!
By the 1960s, Admiral had broadened its product lines to include a much wider range of electronic appliances. These included refrigerators, freezers, and ranges, as well as HVAC equipment like air conditioners and dehumidifiers. As of 1962, Admiral provided almost 6000 American jobs in the state of Illinois.
Unfortunately in the 1970s, Admiral was unable to keep up with the competition from electronics manufacturers in Japan. The appliance division was sold off, eventually being acquired by Whirlpool. The television business became known as AOC International.
For a while, Admiral appliances were being sold by the Home Depot, but they don’t appear to be available any more. Admiral air conditioner parts and users manuals can still be found online, but the brand itself is essentially gone.